Youth Policy and Action; Update from the field vol. 2

As previously mentioned the IPC Alumni has three members outposted in the Philippines volunteering as ‘job shadowers’ during the Erasmus+ funded Youth Policy and Action project. They have now been there for three weeks; all three in different provinces of the Philippines. Last Marie Smidstrup shared her experience in the north and this week Lars Heidtmann is reporting from the municipality of Tanay, Rizal.

The ‘in the field ‘- part of the project is coming to an end. Tomorrow they are all travelling to Manila for the last evaluation meeting with the rest of the 25 job shadowers and the host organisation IGEEI.

Read here, what Lars has experienced:

Back in Denmark the various social welfare and development programs are the core functions of the municipalities. These encompass anything from unemployment to youth-engagement. To be able to compare the different approaches of the municipalities was what initially woke my interest in the Municipal Social Welfare and Development office (MSWD). It’s an office that deals with everything from scholarships for youths, eldercare, “CICLs” (Children In Conflict with the Law – children and youths that have been convicted for crimes) as well as local day-care programs. Together with Lito from Greece and Katherine from Italy/Peru I have been following the social workers from this office for the past 10 days.

Dealing with these programs requires many field visits in the Barangays (smallest level of organization in the Philippines, below the municipalities), which means that we get to see both a lot of how the Philippinos work, especially with young people, as well as the structure behind.

One thing that has surprised me these last days is that generally it seems as if Tanay municipality is both following the national laws (which require a surprisingly high amount of youth participation), as well as having own activities engaging youths. The Mayor himself is only 26 years old and many of the employees are under 30 years old, being as young as 18. Likewise, the municipality itself took initiative to start Tanay Youth Centre (TYC), as well as that the National Training School for Boys (NTSB – a rehabilitation centre for “CICLs”) is located close to the city.

Sharing this experience with Marie reveals perhaps some of the big differences internally in the Philippines, as Marie is experiencing much more corruption and exclusion of youth-interests than we are.
And that is what frustrated me especially during the first days. How can things be so good on the surface? When talking with people from the municipality it was always difficult to get them to talk critically about the municipality. The administration is very hierarchical and people always call their superiors Ma’am or Sir. It doesn’t seem to be a system where you criticize your boss. So all the problems people pointed out where not attributed to bad policies. For example, when it comes to out-of-school youths, the reason for school drop-outs is not attributed to structural problems of poverty and stigmatisation, but broken families and drug abuse (and drug abuse is obviously always a choice and never a product of poverty and disillusionment).

I don’t want to say, that youths in the Philippines and specifically in Tanay, are not being considered by politicians. However, all the engagement that we encountered – in Tanay Youth Centre, with the former leaders of the Barangay Youth Councils, or at the National Training School for Boys – was always apolitical. Resources are posted into sports activities, (very creative and impressive) dance performances, and seminars on healthy relationships (don’t have pre-marital sex kids!). When we asked about debates on anything where youths perhaps could have different opinions than the people running the activities (the municipal staff mainly), we got no for an answer. And none of the youths really questioned this arrangement. Perhaps I’m just a white guy who wants to “liberate” people who are not actually being oppressed. Or the fact that all the youths we actually spoke to were more or less selected by the municipality is the reason why nobody questioned the a-political youth engagement. I can’t tell.

Despite the fact that youth policy in Tanay municipality does not necessarily mean that youths are politically engaged, a proportionally big amount of resources is dedicated to youths. Most of the activities of the Social Welfare Office in some way incorporate young people. And the office doesn’t seem to be treated as a cosmetic façade either. But the fact that we have only really been able to speak with Municipal employees and affiliates means that It’s been difficult to evaluate the actual extent of the social welfare. This can be exemplified by the difference between the National Traning School for Boys (the boys prison), the regular municipal prison, and the detention cells. The NTSB houses around 200 boys under rehabilitation in a spacious, green compound in the mountains. This means they are going to school and are engaged in various activities (such as the impressive dance-theatre-show they performed for us upon our visit) and generally have access to fairly good facilities. These 200 boys however come from around 4 different provinces, though mainly metro-manila (a region with a population of 12,7 million). 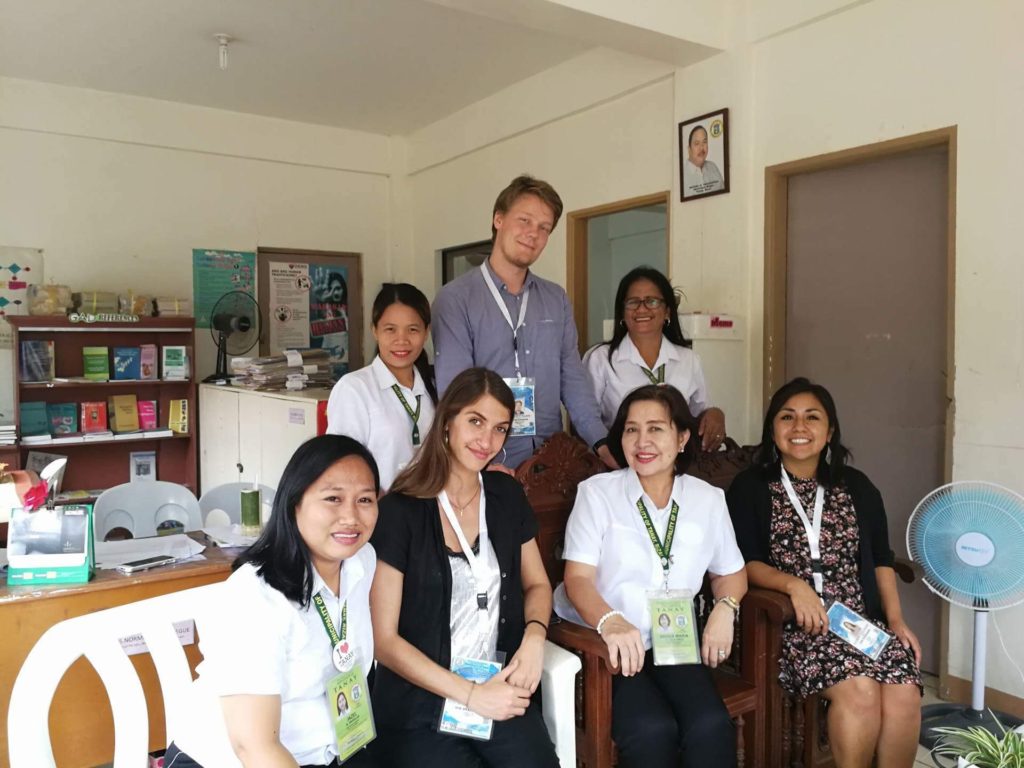 The municipal jail and detention cells are quite a different calibre. The jail houses around 270 men and women in a compressed complex of semi-rundown buildings. There’s a small school-room for the inmates and a yard for playing basketball. The cells themselves are collective rooms of around 20 – 25 people with wooden terraces and blankets for sleeping. The detention cells however hold 125 people in very confined quarters. They are in small metal cages that are so crowded that people can barely sit, not to talk about lie down. Food has to be provided by families in these cells, and detainees have merely 1 hour a day to be in the small yard. Some detainees have waited for a trial for up to 4 years.

Not commenting on the horrific conditions in the detention cells, this difference in allocated resources does pose the question of whether for instance the NTSB is only meant for the children of more wealthy families. In general, the question is, if youth engagement is a privilege of the few, and that we have only met these few. Despite having spent 10 days with youth policy, I cannot answer this question. And it is probably a much more complex question than could be answered in such a short job shadowing project. I’ve scratched the surface of one side of this coin and peeked at the other. There’s a lot that is yet to be uncovered!’